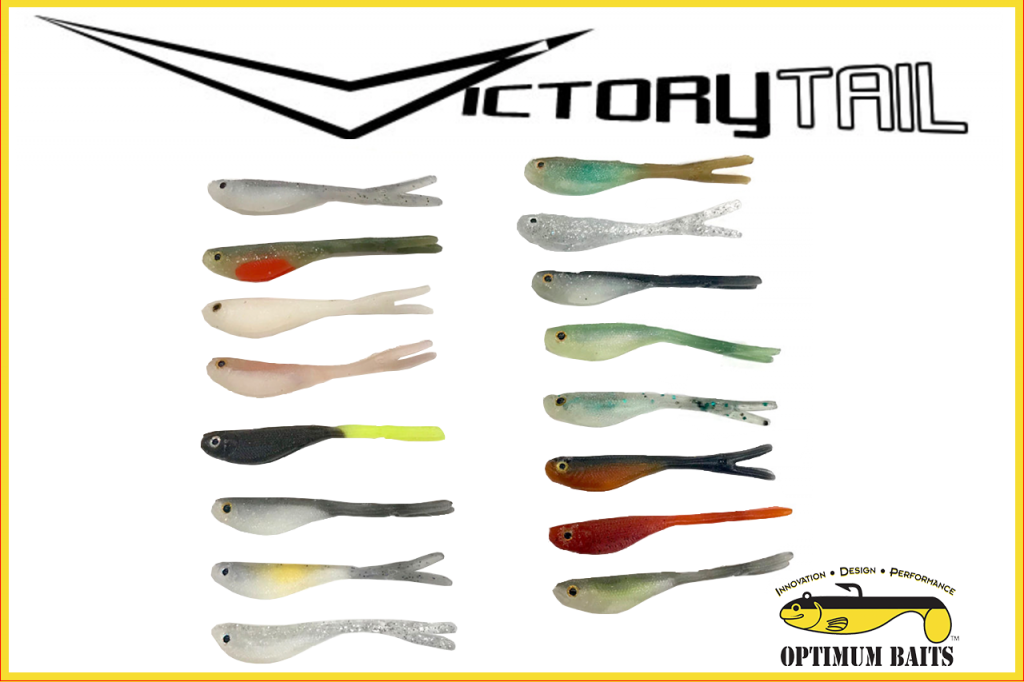 Fred Roumbanis on Drop-Shotting with the Victory Tail

One of the greatest things about the drop-shot rig is that it works with nearly any soft plastic bait on the market. Anglers can have success with everything from finesse worms to soft stickbaits and small swimbaits. You name it; you can drop-shot it.

Knowing which drop-shot bait to use for each situation often comes down to the conditions, and during the summer months when bass are feeding on baitfish, Fred Roumbanis always has an arsenal of the Optimum Baits Victory Tail in the 3” size ready to go. He says it is deadly for bass feeding on small baitfish.

The term “match the hatch” is one of the most overused terms in fishing, but it still makes perfect sense and remains a crucial part of selecting the right lure. When all of the baitfish are small, it pays to use a little bait.

Roumbanis with a smallie that fell for a 3″ Victory Tail.

“It matches what they are feeding on. It could be baby perch, alewives, shad, or any small profile baitfish that are so common during the summer,” said Roumbanis. “It works equally well for all bass species, but the 3” Victory Tail is definitely my go-to for smallmouth.”

He applies the same principle to color selection and trying to closely imitate what the bass are eating, but also has a few favorites. “You obviously want to get it as close to the color of baitfish as possible, but Jackson Trout is always a good one when it is a little cloudy. If it is bright and sunny, Ghost Minnow is one of my best producers,” added Roumbanis.

The 3″ Victory Tail is available in many colors, but Roumbanis has some favorites.

Most often, when Fred is fishing this time of year with the Victory Tail, he is closely watching his electronics to locate bass, baitfish and submerged grass. All three of those components play into how he is going to fish the drop-shot.

“I rely on my Garmin Panoptix LiveScope electronics because it is easy to find baitfish and you get a live look at how the bass are reacting to your bait. If the bass are suspended a little higher in the water column, I will fish the bait up higher off of the bottom and swim it more.

“I’ll also adjust my leader length of my drop-shot if I see bass sitting right above the grass. I’ll go as long as I need to in order to keep the bait right in front of their face,” he said.

When fishing the 3” Victory Tail, Roumbanis is nearly always fishing it vertically to fish he sees on his graph. You can still have success by casting and bringing it back with a horizontal approach, but Roumbanis has learned that he be more productive by fishing for feeding bass he sees on his electronics. This is a high-percentage way to fish as these are often hungry bass that are willing to bite.

By dropping down to fish he sees on the screen, he can create a reaction from the bass and also gauge how high in the water column they are. According to Roumbanis, most of the time, the fish will bite shortly after the bait reaches the bottom. If they don’t, he will continue to shake his bait in place if he notices them reacting to it.https://www.youtube.com/embed/4YCe1Cs-GG0

There is no special gear required to fish this way, but Roumbanis does have a few preferences when it comes to the gear he uses.

His rod of choice is a Dobyns Champion Extreme HP (DX 702SF FINESSE) spinning rod. It is a 7’ medium light rod that excels for lightweight drop-shot fishing according to Roumbanis. He pairs it with a 7.1:1 Six Gill Banshee spinning reel.

“It is hard to find a spinning reel with a fast retrieve like that, and it really helps when you need to get the bait up quickly to make another drop after seeing fish on the screen. It also helps with fish that you hook and race to the surface, which happens all of the time with smallmouth,” said Roumbanis.

One tip he shared was regarding the hookset. “Just a simple reel set is all you need, and you don’t need to pull too hard. Those little hooks are sharp and will hook them easily and keep them pinned,” added the Major League Fishing pro.

Speaking of hooks, Roumbanis said that he prefers a Hayabusa DSR132 Drop Shot hook in a Size 1 or Size 2. “I just nose hook the bait and I’ve found that that is the best hook sizes to get the right action from the Victory Tail, and it hooks them very well.”

There is something to be said about fishing a small baitfish imitator when the bass are actively feeding on tiny forage. The 3” Optimum Baits Victory Tail fits the bill and is one of the best ways to catch summertime bass.