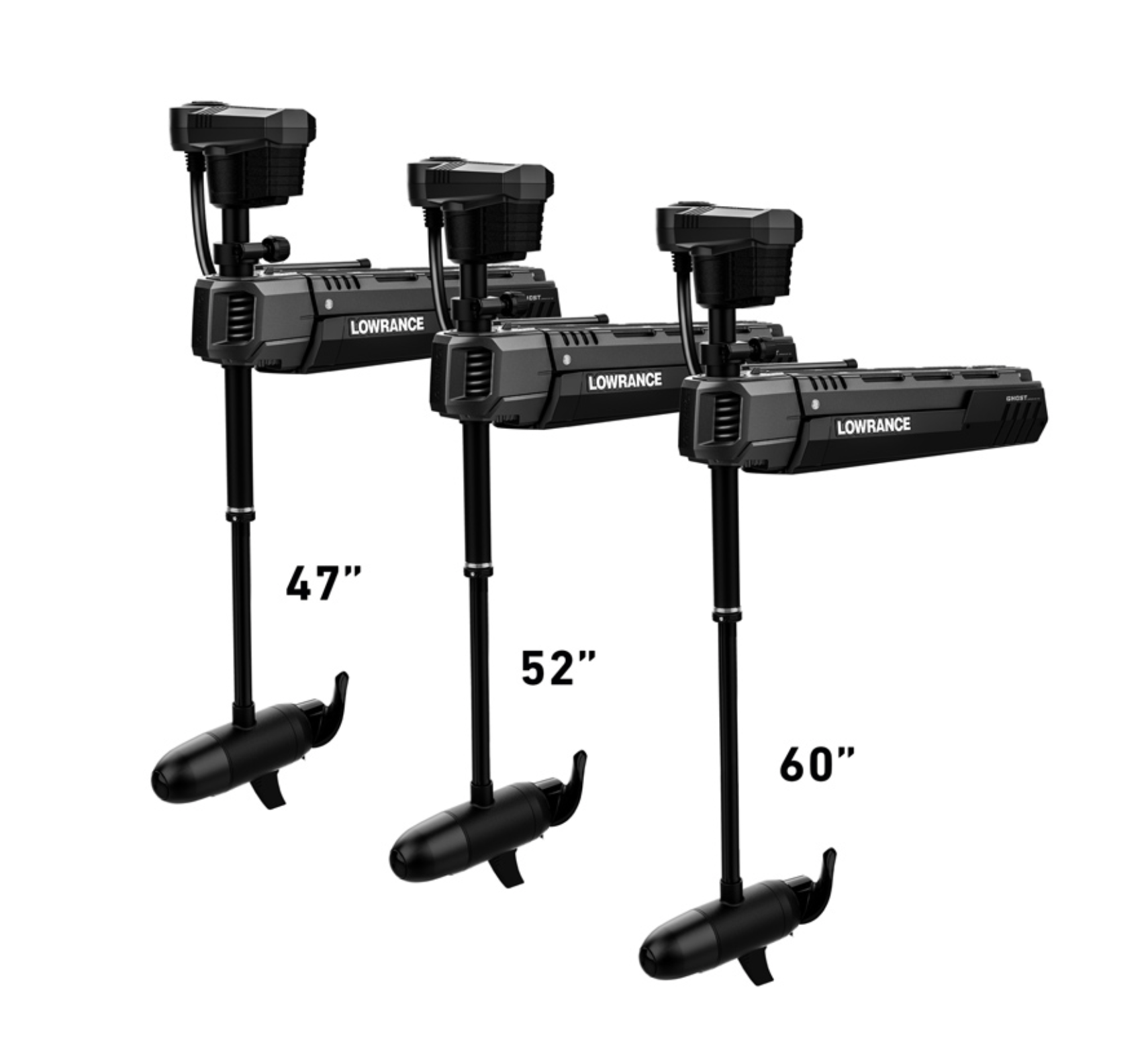 Tulsa, Okla. – Lowrance, a world-leader in fishing electronics since 1957, announced today the expansion of its award-winning Lowrance Ghostâ freshwater trolling motor design with the new Ghost 52 and 60.

The new Ghost 52 and 60 models – with 52- and 60-inch shafts, respectively – bring all the benefits and features of the original Ghost trolling freshwater motor to boats with higher bows. Now there is a Lowrance trolling motor to fit the needs of all bass anglers, as well as a wide range of multi-species and walleye boats.

“We broke the mold last year when we announced the Lowrance Ghost freshwater trolling motor for bass anglers,” said Lucas Steward, Executive Vice President for the Lowrance brand. “After the initial launch, we got a huge outpouring of feedback from customers looking for this same functionality for vessels with higher bows. We listened and now there is a Ghost for nearly every freshwater angler.”

Features of the Lowrance Ghost 52 and 60 trolling motors include:

Instant and smooth fly-by-wire steering control gives Ghost the feel of a cable-steer motor, but without the mechanical cables that can wear out over time. Regardless of the brand of trolling motor used before, anglers will quickly get comfortable with the innovative Ghost foot pedal, which is completely user configurable. The pedal can be customized to suit any preference with programmable shortcut buttons and a Flip Switch that can be moved to allow the trolling motor to be engaged from either side of the pedal. The mode buttons have LED lights and an indicator beep to provide feedback when a mode is engaged. The foot control also features a battery-level indicator. In addition, the Ghost 60 includes a standard remote for easy control anywhere on the vessel.

The 360-degree breakaway mount is designed to take the brunt of any impacts and will automatically realign itself once clear of impacted structure. A composite shaft, with lifetime warranty, assists in withstanding impacts; and an integrated stabilizer bar reduces bouncing when on plane in rough water. The foot pedal cable is secured to the mount with robust clips, preventing it from moving around on the deck, damaging rods and reels and blocking the view of Lowrance fishfinders installed nearby.

The motor weighs 6-pounds less than brushed-motor equivalents, making it easier to install, deploy and stow. Ghost is designed to work in either 24- or 36-volt systems with up to 97- and 120-pounds of thrust respectively, and allows for future battery and charger upgrades.

Ghost 52 and 60 models will be available in December 2020 and are priced at $3,199 and $3,399 respectively. For more information about the Ghost family of trolling motors or the entire Lowrance line of marine electronics, please visit www.lowrance.com.